If you signed a purchase contract with a developer, gave in your money and your house was never finished, within your desperate situation, we have good news. There are affected people who are now recovering the money they paid upfront plus a 6 % interest. How? Well, they have passed their case on to hands of expert lawyers.

The first Supreme Court decision regarding this issue has been published recently, creating legal precedence in this matter which has given many headaches to: developers, banks and buyers.

The purchases of new properties, carried out before the 1st of January 2016 will apply the Law 57/1968. This law stipulates that for those who develop new property constructions (not including state subsidized properties), and expect the buyers to pay an amount upfront must guarantee the refund of the amounts paid plus a 6% of interest, providing an insurance or bank guarantee for those cases when the construction works never begin or the construction is never finished. Also, this money must be paid into a special account, which must be created exclusively for the project in question.

With the Construction Boom, when the economy of our country reached its peak, the guarantees contemplated by law had no importance, as the constructions were paid without trouble and in these circumstances the financial entities that financed the complete developments stopped asking for these guarantees, as they raised the price of the operation, and they were no longer needed as the properties were built and sold very quickly. The whole process of development and construction worked with no problem, it turned very fast, the lands were bought very quickly the construction was even faster and there was no inconvenient what so ever for the buyers to receive a finance for these constructions. 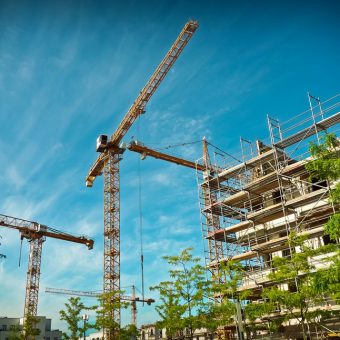 But that bubble burst, Leman Brothers in United States, Caja Castilla la Mancha in Spain and many other entities came down. Since then the constructions started to go slower, banking stopped financing, they reduced the credits to developers and buyers and lots of promotions were abandoned without being finished as they had no money to continue and many developers were left hanging with little payments received upfront form the buyers and were used to pay their providers, but they never refunded their clients. Then came the bankruptcy of loads of construction, state agencies and promotors companies, as well as the bankruptcy of all the construction “satellite´´ companies: wood, doors, windows, iron, cement, etcetera. Remember that the financial entities had stopped asking for the “unnecessary´´ bank guarantees and insurances, so there was no money refund what so ever. Obviously the buyer was also affected by all this, as the construction company in bankruptcy didn’t receive any money in return and they had no one to claim for these payments.

After many sentences for first judgements on this issue, the Supreme Court pronounced sentence, on the 15th of December of last year, this decision makes clear his position towards these abandoned constructions and the amounts paid upfront by the clients, according to the Ley 57/1968, de 27 de julio, sobre percibo de cantidades anticipadas en la construcción y venta de viviendas (Law 57/1968, of the 27th of July about perceive of anticipated amounts in the construction and sold properties), which we remind was repealed at the end of year 2015, by the request of the financial entities.

So now, the Supreme Court has confirmed a sentence in first instance (from year 2011) in a court in Levante, stating that, in some cases and if they cover certain conditions, the financial entity that had accepted to open an account to a developer for a property construction without requiring an insurance or bank guarantee, they will be directly responsible, and in which case, they will be forced to refund the amounts payed upfront by the buyers of that property in construction.

In short words, he states doctrine indicating that all those purchases ruled by Law 57/1968, the credit entities that accepted incomes from the buyers will refund the buyers for the total amounts anticipated by them.

To adjust to the new circumstance, Law 57/1968 was repealed and the First Additional Disposition of the Law 38/1999 took effect on the 1st of January 2016. This disposition states that together with the sign of a purchase contract, the developer must provide the buyer with an official document with a guaranty to respond towards a possible refund of the amounts, and not only a 6 % interest of the amounts refunded, but they will adjust to legal money interest and the consumer will count with a 2-year period to claim for the amounts paid.

If this is your case, or you think of anyone in this position, forward this information so everyone can claim for their rights.

From RUIZ BALLESTEROS Lawyers and Tax Advisers we remind you that all the information we offer is to a specific date and of course each case must be studied separately without comparing with other cases, as the conditions and circumstances to be able to claim for these amounts may not be covered in every property in construction purchase contract.

Our offices are in Marbella (Málaga), where we will be delighted to attend this, and any other issue you need, please book an appointment with us by calling our phone number 952.779874.

Macarena has studied “ Derecho´´ (Legal Degree) and a Master for “Finanzas´´ (Finances) by the Complutense University of Madrid, as well as a “Máster en Asesoría Jurídica de Empresas´´ (Master in Legal Corporate Advice) by Garrigues (Multinational Company of Legal Services). She started her career working for the ACS group at their offices in New York (USA) in their accountancy department, she came back to Spain to work for the legal contracting department for Mahou – San Miguel and she became part of our team at Ruiz Ballesteros Lawyers and Tax Advisors in 2013. She is an expert in Commercial Contracting and Property Investments, and is part of our Corporate-Commercial Department, speaks English and counts with a wide experience in legal defense.