New developments in taxation for 2017

On 2nd December 2016 the Spanish Cabinet passed a Decree-Law which reduces the amount of cash payments to 1,000 euros (up until now the limit was 2,500€), as payment for any goods or services involving a company or a professional.

This measure came into force on 1st March 2017 in an attempt to reduce tax fraud.  You should be aware that the amounts are to be calculated for all transactions taking place during one year with the same customer or supplier.

As regards the tax increases for 2017, the object of which is to comply with the EU deficit allowed by the EC, the Government approved the following amendments:

Amendments to the General Tax Act, the most significant are:

In this respect it should be clarified that, unless provided otherwise, any deferrals that were requested before 1st January 2017, shall be governed by the legislation prior to that date.

Last but not least is the approval of coefficients for updating the land registry values for 2017; these will depend on the year in which the Official Table of Values was approved in each province of Spain, so that, according to the year in which that Official Table was established, one coefficient or another is applied to the municipalities included under Order HAP/1553/2016, in the following terms: 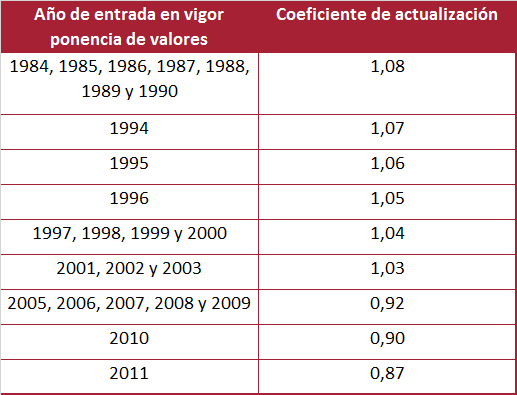 You will find more articles on this and other aspects of Spanish legislation in the Ruiz Ballesteros Lawyers and Tax Consultants newsletter, or on the following link: https://www.ruizballesteros.es/en/blog-en

Jesús is Economist and Lawyer. He studied “Licenciatura de Economía´´ (Bussines and Financial Degree) at the University of Navarra, and is “Máster en Tributación´´ (Master Degree in Taxation) by Garrigues (Multinational Company of Legal Services), where he started to work at their office in Granada. After this, he worked for two well-known multinational companies, while he studied “Derecho´´ (Legal Degree) in Madrid until he finally opened Ruiz Ballesteros Lawyers and Tax Advisors at the beginning of 2006. Jesús is a frequent collaborator of Radio Intereconomía at their program “Foro Fiscal´´, this program is based on tax advisement, Cadena Ser and Ondacero. He wrote a Thesis at the University of Granada which he then defended before the correspondent court, obtaining the DEA in Financial and Tax Law. The title of his Thesis: “Intercambio internacional de información tributaria y Paraísos Fiscales´´ (International tax information exchange and Tax Heavens), this makes clear that he is one of the few that have delved into this aspect of the law, and this makes it easier for him to deal with all issues related to international taxation. He is the author of the book “ Como rentabilizar tu declaración de la renta´´ (how to render your annual personal income-tax) and he is the ideologist and developer of the first legal App in Spain. Paxtum, where you can download models of all kind of legal documents. Professor of the “Instituto Superior del Derecho y Economía´´ (Institute of Law and Economics) (ISDE), in the areas of Commercial Law and Tax and Financial Law, he is co-author of their theoretical books in both areas as well as their book of “practical cases” in Financial and Tax Law. He is an expert in the Spanish taxation system, international taxation, and corporate-commercial law. He speaks English and is the Founder and Director of our company. Ruiz Ballesteros Lawyers and Tax Advisors.

This website uses cookies to improve your experience while you navigate through the website. Out of these, the cookies that are categorized as necessary are stored on your browser as they are essential for the working of basic functionalities of the website. We also use third-party cookies that help us analyze and understand how you use this website. These cookies will be stored in your browser only with your consent. You also have the option to opt-out of these cookies. But opting out of some of these cookies may affect your browsing experience.
SAVE & ACCEPT
Abrir chat