On August 17, 2015, the Regulation (EU) 650/2012, of 4 July 2012 of succession came into effect to regulate successions due to causes of death in which an international element is present.

when would be this Regulation applicable?

The Regulation would be applicable in those successions where the deceased resides in a different State of his State of origin or in those other cases in which, for example, the deceased had some property in a State different than the one of his nationality.

What changes does the Regulation imply?

The entry into force of the aforementioned Regulation has implied, among other, a change in the criteria used to determine the applicable law in successions in which an international element is present.

Notwithstanding the above, the Regulation establishes an exception to this general rule and it allows that any person may choose as applicable law the one of the State of the nationality that he held at the moment of doing the election or at the time of death (“profession iuris”).

This election would have consequences on the limits to the freedom to dispose of the inheritance, as the applicable law shall govern the whole of the succession, and therefore it shall affect, among others, to the part of free disposition, the legitimates, the partition of the inheritance, the restrictions to freedom of disposition mortis causa, as well as to the computation of the donations and liberalities.

In order to clarify the scope of this matter, here is an example of how the choice of one law or and other may affect to the succession:

“Frank is a business man of German nationality, who resides on Costa del Sol (Spain). He         has three children, two from a previous marriage with a German lady, and the other of his current marriage with a Spanish lady.

Frank’s patrimony is constituted by the 100% of the shares of a Spanish company. Frank dies in November 2018 without granting a will, therefore the applicable law shall be the Spanish law and it shall correspond to their children the 33,33% of the company’s share capital, to each one, and to the Spanish widow the 33,33% of the usufruct, which shall be extinguished upon her death.

Notwithstanding, if Frank would have granted a will establishing that his succession would be governed by his national law, this is the German one, his wife would be entitled to one quarter of the shares and another quarter to share in profits, that is the 50% of the shares, and the other 50% would have been distributed among the children in equal shares.

Therefore, it would be convenient for the widow that her husband would choose the German law, while the children would be benefit from the law of his residence, that is, the Spanish law.

Also, it is important to bear in mind that if Frank had granted a will accordance to the German law, he could have disposed everything in favour of whoever he wanted, since German law recognizes the freedom to dispose of the patrimony, without applying any legitimate.”

By this way, the Regulation (EU) of succession makes available to citizens a mechanism to improve their succession planning, avoiding that it depends on an element as uncertain as the place of the residence at the end of their life.

Finally, it is important to bear in mind that the aforementioned Regulation is not applicable in Denmark, Ireland and United Kingdom. Notwithstanding, it shall affect to the nationals of these states who residence in other member states of the European Union.

Consequently, if a British citizen lives in Costa del Sol and dies without granting a will, his succession shall be governed by Spanish law, applying the system of legitimates established in the Spanish law, instead of the legislation of United Kingdom, where applies the absolute freedom of any person to dispose as he pleases of their property upon his death.

Notwithstanding, this would not happen if the British citizen has granted a will determining as applicable law the one of his nationality.

Therefore, Ruiz Ballesteros recommends, in case of you find in some of the exposed situations, to evaluate the different option of applicable law, in order to determine if it is convenient to grant a will and exercise the professio iure. 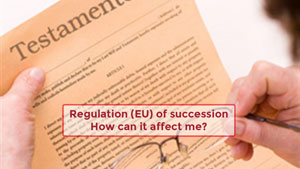 Título del post
Regulation (EU) of succession How can it affect me?
Descripción
On August 17, 2015, the Regulation (EU) 650/2012, of 4 July 2012 of succession came into effect to regulate successions due to causes of death in which an international element is present. Therefore, when would be this Regulation applicable?
Autor
Mercedes Nieto
Editor
Ruiz Ballesteros
Logo editor

2 thoughts on “Regulation (EU) of succession How can it affect me?”