Tax consequences of the United Kingdom leaving the European Union without agreement next October 31st, 2019

Next October31st, 2019, the United Kingdom´s exit from the European Union will become effective in the known as “Hard Brexit”, and this State will be considered a “third country” for the purposes of the European Community regulations, unless a last minute departure agreement take place between both parties, which might include a transitional period.

Due to the relevance and impact that Brexit may have on your activity, the Spanish Tax Administration has already begun to send some informative letters to taxpayers explaining the tax consequences that will take place as of November 1st, 2019.

• How does Brexit affect me?

If you carry out operations with British customers or suppliers, you should know, as soon as possible, the tax consequences of the UK exit, in order to assess the impact it would have on your business and even to adapt, if you consider it so, your internal organization and your logistic chain.

It is important to note that it is common for many non-EU operators to have a permanent establishment or branch in the United Kingdom (having a VAT number with a GB9999999 99 format) with the aim of subjecting their purchases to the European VAT regulation being an intra-community transaction; therefore, if that were the case with your suppliers, the Brexit process would also directly affect you.

• And, what tax consequences does the exit of the Customs Union have?

The main consequence of Brexit is, as the Spanish Tax Agency indicates, “that good trade flows between Spain and the United Kingdom will no longer be considered intra-community operations and will became subject to customs formalities”. This can be mainly analyzed in two ways:

As you know, (until today) the 28 members of the European Union constitute a unique territory for custom purposes, which allows (i) not to pay tariff duties on the transfer of goods between EU countries, (ii) to have a unique tariff code for all EU countries with respect to goods imported from outside it and (iii) to move freely within the territory of the European Union any asset that has entered through any of the custom office of the custom union territory, without the need to go through more customs controls.

For this reason, once the United Kingdom´s exit from the European Union is certified, it will no longer belong to the EU Custom Union. Consequently, any operation of transfer of goods from, or to the United Kingdom, must be subject to the customs formalities of the EU, among others: the obligation to submit an import or export declaration, to subject the goods to customs controls, to pay the possible tariff duties and to obtain the required quality, sanitary, or phytosanitary certifications, etcetera; depending on the regulations.

In this regard, it should be noted that before a Custom Office, the subject can act in his own name (for which he must obtain an “EORI” number before the Spanish Tax Agency) or through a custom agent, so, if you are going to opt for that second option, it is convenient that you can elect it as soon as possible and agree on the operational management to follow.

In addition, it should be remember that, as we have already analyzed in previous posts, if a company from an EU Member State has intention to carry out business transactions subject to Spanish VAT, it needs to obtain a “NIE” number in Spain, but to appoint a tax representative person in Spain is not required. However, if the interested party is a non-EU one, as will happen with the UK companies from November 1st, 2019, the Spanish regulations may require him to appoint a Spanish tax representative person who will be jointly and severally responsible for complying with tax obligations, as well as to obtain an “EORI” number.

Consequently, from November 1st, all legal persons with tax residence in the United Kingdom that require a Spanish NIE may need to appoint a tax representative with Spanish residence.

The operations with the United Kingdom will no longer be considered intra-community ones and will work as those carried out with any other non-intracommunity provider. In particular:

The determination of the operations as non-intra-community one is especially relevant if we take into account that article 70.2 of the Spanish VAT law (known as the “effective use rule”) will be applicable. This rule affects a closed list of services, such as mediation in the name and on behalf of others, the lease of transport, electronically provided services, telecommunication ones, broadcasting and television services, and so on.

Under this provision, if the effective use or exploitation of those services take places in the Spanish VAT territory, the performance of the service is located in it and, therefore, it is subject to Spanish VAT, regardless of the recipient residence.

However, these requirements and limitations will not apply to the VAT paid before the United Kingdom exit date from the European Union.

And, in the same way, Spanish companies or any other EU Member State that have carried out operations with UK companies must include in their MOSS VAT returns the services provided in the United Kingdom from January 1st, 2019 until the UK exit date, despite these tax forms must be submitted after the mentioned date.

In summary, the relevance of the changes that are coming from  November 1st, 2019 requires being prepared for them and, in any case, we always recommend you to be advised by professionals of your trust in order to perform a correct tax planning, to assess the impact that forthcoming tax changes may have on your business, and to anticipate yourself as much as possible in order to avoid future mistakes.

[1] Unless the Spanish taxpayer would have opted for the “deferred import VAT” regime application, which allows him to pay the import VAT in the moment of submission of the period tax return and as long as he meets all the legal requirements for the application of the aforementioned regime.

[2] With the aim to avoid double taxation (as an intra-community acquisition and as an import of goods), in case goods are in transit in the UK exit moment, the EU has determined that if the beginning of the transport occur before October 31st 2019, but the arrival of the goods takes place after that date, those transaction will not be considered as intracommunity ones but as import of goods. 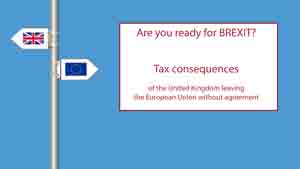 Título del post
Are you ready for BREXIT?
Descripción
Next October31st, 2019, the United Kingdom´s exit from the European Union will become effective in the known as “Hard Brexit”, and this State will be considered a “third country” for the purposes of the European Community regulations, unless a last minute departure agreement take place between both parties, which might include a transitional period.
Autor
Carmen Gallardo
Editor
Ruiz Ballesteros
Logo editor

Recent comments
Geof Harrison
for capital gains tax reasons i need to know what is classed as my first day in spain. the day i signed for my house ,the day i moved in, the da...
When am I considered to be a Tax Resident in Spain?
Maurice
Hello I am considering transferring the usufruct of my house in Malaga into my UK Limited Company. I would be grateful if you can outline ...
The Capitalisation of Usufruct in Spanish Inheritance Tax
Bill
I will have a nonlucrative visa shortly. I am on a yacht and will be visiting several Mediterranean countries. When will I become liable for V...
When am I considered to be a Tax Resident in Spain?
Christoph
As a rental company we provide a platform where the owners can advertise their holiday rentals. Clients can rent online, make reservation, and ...
How Does VAT Work for Holiday Rentals?
Valerie Keating
I see this is an old post, so I'm not sure if you are still looking at comments, but...I have been searching hard to find out if a US citizen in...
When am I considered to be a Tax Resident in Spain?
juan
interesting. But what about taxes ? According with the choice made (example Germany or Spain), tax will have to be paid in Germany or span, or a...
Regulation (EU) of succession How can it affect me?